I have a confession to make: I don't watch much football. But last night I watched Barcelona outplay Manchester United. Barcelona were superb with their control, possession and all round footballing play.

Something was disturbing me about Man Utd's strip. After several minutes I realised what it was. The red arm patch with the black and white logo, of the Champions League starball, evokes the image of a Nazi arm band. I'm not saying this was an intentional design conceit but I don't think you can have a red band on your arm with a white circle with a black geometric shape without it evoking a Nazi arm band.

See this image taken by Tom Jenkins for the Observer 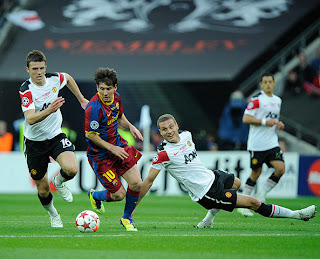 The arm patch of the geometric ball on a red band evokes a nazi arm band.

There is a history of designers "playing" with Nazi imagery. Often it's not through any malevolent intent but purely through ignorance of the historical and political context of the imagery. An example is when Bryan Ferry apologized for liking Nazi imagery.

He told Welt am Sonntag: "The Nazis knew how to put themselves in the limelight and present themselves.

At the risk of summarising and simplifying too much, part of the appeal of the Nazis to 1930s Europeans, was their style, showmanship, iconography and their ability to put on a show. Another part of their appeal was scapegoating and offering brutal and simple answers but here let's just say the Nazis were a criminally bad and murderous organisation with an iconography that still sppeals to some people today. It's not that most designers use the iconography because they have Nazi sympathies, it's often because the imagery, shorn of its political and historic context, looks simple and modern. To separate the imagery from the context takes an almost incomprehensible level of ignorance but we do live in a world where too many still suffer from Beveridge's five 'Giant Evils' of 'Want, Disease, Ignorance, Squalor and Idleness'.

To summarise, as I mentioned earlier, I don't think you can have a red band with a black geometric shape in a white circle without it evoking nazism.
Posted by Neil at 4:35 pm No comments:

Some Musings on Universities

In trying to formulate a response to Howard Hotson's piece in the current LRB, "Don't Look to the Ivy League", I found this quote about an English university:

The University of Cambridge is an exempt charity subject to regulation by the Higher Education Funding Council for England (HEFCE) under the Charities Act 2006.

I was tickled by the phrase "from time out of mind". Since, like yonks ago, to put it in the contemporary vernacular.

The Higher Education Funding Council for England, HEFCE, points out that all bar one, of England's higher education institutions, are incorporated as private charitable corporations. Essentially, in England, the only public institution of higher education is Guildhall School of Music which is controlled by the, not very democratic, Corporation of the City of London. All other institutions are in reality private corporations that are publicly funded. There is little democratic control of the trustees and management of these institutions. There is little in law to stop English universities deciding to go fully private, and refuse public funds tomorrow. That surely means they are not public institutions.

Hotson's argument amounts to looking at the different resources, including GDP and population in the US and the UK, contrary to accepted wisdom, the US actually underperfoms in the THE-QS World University rankings. He makes a welcome contribution to the debate when he argues that there is no evidence of private sector competition driving up academic standards, and, if anything, treating students as customers only serves to introduce grade inflation and leads to expenditure on "the student experience" instead of education. All reasonable conclusions with which I agree. However some of Hotson's reasoning is a bit squiffy.

In looking at the geographical distribution of the top 100 universities in the THE rankings for 2010-11, by which I assume he means this, he says "The wealthiest private universities at the top of the league table .. are concentrated on the northeastern seaboard of the United States". Now the list beginsNow, CalTech and Stanford are private institutions in California, which is nowhere near the northeastern seaboard. Perhaps he means another THE ranking?

Now, just because you can manipulate numbers it doesn't mean that you should. Hotson argues

According to Unesco, there are 5758 recognised higher education institutions in the US, about 1600 of which grant four-year degrees. So the 72 US universities in the top 200 represent fewer than 5 per cent of those offering four-year degrees. The US university system overall appears to offer poor value for money: none of the funding, public or private, pouring into 95 per cent of the higher education institutions in America makes any impact at all on the world university rankings. By comparison, the 29 UK universities in the top 200 represent nearly a fifth of the 165 listed by the Higher Education Statistics Agency. So British universities appear, on average, to be almost four times better at breaking into the global top 200 than their American counterparts.

I'm not disputing Hotson's conclusions it's just that some of his arguments are nonsense.
Posted by Neil at 12:12 am No comments:

Years ago I borrowed a Tindersticks album from Wolverhampton Central Library. What a find.

Here's a video of My Sister.
Posted by Neil at 8:17 pm No comments: