Censure me in your wisdom

Yesterday went to see a splendid production of Julius Caesar at the Courtyard Theatre in Stratford.

It was gory. The blood flew about the stage. And the politics proved contemporary enough. 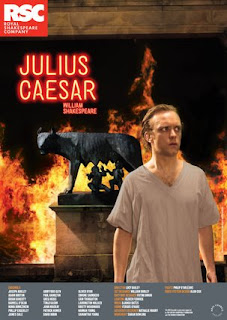 These are the speeches that impressed:

DECIUS
Never fear that. If he be so resolved,
I can o'ersway him. For he loves to hear
That unicorns may be betrayed with trees,
And bears with glasses, elephants with holes,
Lions with toils, and men with flatterers.
But when I tell him he hates flatterers,
He says he does, being then most flatterèd.
Let me work.
For I can give his humor the true bent,
And I will bring him to the Capitol.

Then from Act III scene 1

CAESAR
And you too, Brutus? In that case, die, Caesar.
(he dies)
CINNA
Liberty! Freedom! Tyranny is dead!
Run hence, proclaim, cry it about the streets.

CINNA
Liberty! Freedom! Tyranny is dead! Run and proclaim it in the streets.
CASSIUS
Some to the common pulpits, and cry out,
“Liberty, freedom, and enfranchisement!”

And again from Act III Scene 1

ANTONY
O, pardon me, thou bleeding piece of earth,
That I am meek and gentle with these butchers!
Thou art the ruins of the noblest man
That ever livèd in the tide of times.
Woe to the hand that shed this costly blood!
Over thy wounds now do I prophesy—
Which, like dumb mouths, do ope their ruby lips
To beg the voice and utterance of my tongue—
A curse shall light upon the limbs of men.
Domestic fury and fierce civil strife
Shall cumber all the parts of Italy.
Blood and destruction shall be so in use,
And dreadful objects so familiar,
That mothers shall but smile when they behold
Their infants quartered with the hands of war,
All pity choked with custom of fell deeds,
And Caesar's spirit, ranging for revenge,
With Ate by his side come hot from hell,
Shall in these confines with a monarch's voice
Cry “Havoc!” and let slip the dogs of war,
That this foul deed shall smell above the earth
With carrion men, groaning for burial.

Given the current parliamentary political circumstances I could not help imagining the heroic Regicides and the current, less than heroic, cabinet.
Posted by Neil at 6:27 pm