With fascists winning two seats in England in the 2009 Euro elections has English politics reached a nadir or are there further depths to plummet?

Nazi Nick Griffin got 8 per cent in the North West.

The fascist party got 8.9 per cent in the North East; and 8.6 percent in the East and West Midlands.

A large section of the public has spoken and revealed itself as nasty, vicious, self obsessed, supporting a bullying fascist party revelling in jackboots smashing a human face forever.

And here's a picture: 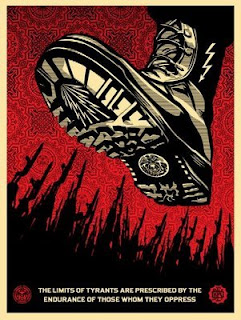 Here's that quote in full from Frederick Douglass:

* If there is no struggle, there is no progress. Those who profess to favor freedom, and yet depreciate agitation, are men who want crops without plowing up the ground. They want rain without thunder and lightning. They want the ocean without the awful roar of its many waters. This struggle may be a moral one; or it may be a physical one; or it may be both moral and physical; but it must be a struggle. Power concedes nothing without a demand. It never did and it never will. Find out just what a people will submit to, and you have found out the exact amount of injustice and wrong which will be imposed upon them; and these will continue till they are resisted with either words or blows, or with both. The limits of tyrants are prescribed by the endurance of those whom they oppress. Men may not get all they pay for in this world; but they must pay for all they get. If we ever get free from all the oppressions and wrongs heaped upon us, we must pay for their removal. We must do this by labor, by suffering, by sacrifice, and, if needs be, by our lives, and the lives of others.
o An address on West India Emancipation (1857-08-04)

A large section of the public has spoken and revealed itself as nasty, vicious, self obsessed, supporting a bullying fascist party revelling in jackboots smashing a human face forever.

If the BNP are odious as Anon acknowledges, and what the party stands for shows nastiness, viciousness, and self-obsession as they truly are a set of bullying facists, then why not challenge those who thought it okay to vote for the BNP as sympathetic and tarred by those same sentiments?

The point is that however disenchanted voters may be with mainstream politics, there is nothing appropriate in voting for the BNP. Is criticising the party and those who vote for them - showing them up for what they are - really what is compounding the problem?

My point being, what would Anon suggest we do instead? How do you criticise and critique the BNP and their voters if you pretend that the racialism isn't at its core?