If you like what you've seen you can always subscribe to the Neubauten supporters site. Go on. Sounds like this need your support.
Posted by Neil at 7:17 pm No comments:

I have just finished reading Daniel Pennac's "The Fairy Gunmother". A most enjoyable read, and the second part of the Malaussene Saga, set in the Paris neighbourhood of Belleville. One of the lead characters, Benjamin Melaussene, is employed as a scapegoat by a succession of companies. His partner, Julie Correncon, is the daughter of "ex-Colonial Governor Correncon, the Independence Man, as some newspapers put it at the time, or else The Gravedigger of the Empire" and recollects her time living with her father.

"Correncon had been the first to negotiate with the Viet Minh, when it still hadn't been too late to avoid a massacre. Under Mendes-France, he'd worked out a self-governing status for Tunisia, then he'd worked under De Gaulle when it was necessary to give Black Africa back its freedom." p224

Ex-Colonial Governor Correncon believed in Geography. "Don't try to write History, just let Geography have its say" to which Che laughed "Geography is just a collection of movable facts."

"What is a colony, student Giap?", Correncon asked in a colonial schoolmaster's voice.

And, just to make Julie laugh, Vo Nguyen Giap, who was later to become the victor of the battle of Dien Bien Phu, replied in a schoolboy's chant:

"A colony is a country whose civil service belongs to another country. For example: Indochina is a French colony and France is a Corsican colony". p224

From the laughter the recollection passes to the aftermath.

No sooner had countries been given their independence, than Geography had started making History again, as though it were an incurable disease. An epidemic with a high death count. Lumumba was executed by Mobutu, Ben Barka's throat was cut by Oufkir, Farhat Abbas was exiled, Ben Bella imprisoned, Ibn Yusuf eliminated by his own men, Vietnam was forcing its own History onto a Cambodia which had been bled dry. Friends from the ... farmhouse were being hunted down by friends from the ... farmhouse. Che himself had been shot in Bolivia, with, so it was whispered, Castro's tacit agreement. Geography endlessly tortured by History ..." p226

[ Many apologies for the apostrofly in the heading of this piece. I am going to do the honourable thing and go outside and shoot a panda. ]
Posted by Neil at 2:42 pm No comments:

Sometimes you recall something that affected you and then you spend ages trying to find it. Well I could not think who sang the 1984 song "Germans". But that's not what I was trying to find. My favourite moment from Live Aid 1985 was the performance and speech by Udo Lindenberg. Here it is, in full:

Although it is great that over 30 to 50 million dollars are being raised for Africa, it is but a small token of repayment for the years of colonial explotation.
The only real help will be the inmediate withdrawal of all military and economic interests on the part of Europe, Japan, USA and the East-Block.

It is a perverse tragedy that we allow the spending of 1000 billion dollars for murderous weapons.

With a small part of this amount we could feed the entire world.
We ask when will there be a rising up of global conscience.

40 thousand children die every day at the hands of this military built-up.
It is a crime that this madness has now moved into another dimension.
These governments in Washington and the Kremlin are sick in their heads.

They are still walking in a dense fog.
We – from this country which has instigated two terrible wars - appeal to all people who still close their eyes to this schizophrenic world :
stop the wars in the Thirld World.
Stop the crime of military built-up.

We cannot forget the purpose behind this event.
If this should turn out to be only a huge Rock ‘n’ Roll celebration – carried out on the backs of dying children - we can forget it.
We see our song as a demonstration of those people who will no longer condone this insanity - we rise up against it.

It was the single event on the day that summed up what it should have been all about. I also recall the BBC getting complaints about the "unnecessary introduction of politics into an otherwise enjoyable event". Such was life in 1980s Britain, where people believed that poverty, starvation and wars were issues that had nothing to do with "politics".
Posted by Neil at 5:27 pm No comments:

Labels: Stop the crime of military build up

I know penguins can be kept indoors, after all I have read about Misha in Death and the Penguin by Andrey Kurkov. This guy saw an ad for a pet penguin and realised he'd always wanted one.

I didn’t realize it before that moment, but I had always wanted a pet penguin. Probably everyone has. I just never thought it was possible. Penguin Warehouse assured me that it was in fact possible

So this guy buys an inflatable pool and, against all advice, installs it in his living room. He has a decision making flow chart that many a management consultancy may be interested in. (This flowchart is from Pooter Geek via The Fishbowl, who tidied up the flowchart from the original). 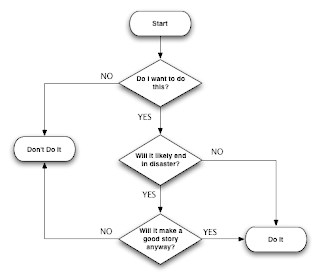 Read it and laugh or weep. It made me laugh.
Posted by Neil at 12:31 pm No comments:

Nick Cohen, in today's Observer, discusses inequities in the UK tax system. He argues that

In public, the City paints a terrifying picture of foreign bankers fleeing Britain if the government requires them to pay the same tax rates as everyone else, but in private, no financier I know believes it. The odd Russian gangster will leave, they say, but London is too important a financial centre for global players to abandon.

Because Brown lacks the moral and political confidence to call the City's bluff, his debauched tax system is debauching British society. Tax-free money is making housing in the south east and beyond too expensive for the middle class, let alone the working class that Labour once represented. The legacy of a decade of Labour rule is that the modest hope of a house in which they can have children is beyond hundreds of thousands of couples.

And as it debauches the economy, it also debauches politics.

Many of the millionaires donating/lending to the Labour Party pay very little tax.

In the financial year 2004/5 the top 20% of households, "ranked by equivalised disposable income" paid 35.6% of their gross income in taxes, while the bottom 20% paid 36.4%. That's according to Stephen Penneck, on behalf of the National Statistician, in a Paliamentary letter dated 25th July 2006 based on a report "The effects of taxes and benefits on household income, 2004/05" by Francis Jones by the National Statistics Office.

Is it fair that people who have a low income pay a greater percentage of their income in tax than those who have a higher income? No. It's quite simple. It's wrong. Let's take more and more low paid people out of paying tax altogether. Raise the threshold at which people pay tax and also raise tax rates. And simplify the tax system - you earn it you pay tax on it. Simple.

If you want to see some arguments that the current system is perfectly fair read the comments to Nick Cohen's piece and weep. The spirit of Ebenezer Scrooge is alive and well.

[Note to self: the title of this piece is a pun on Thurn und Taxis Pynchon's Crying of Lot 49]
Posted by Neil at 4:44 pm No comments:

Sky Bully in the news

In today's Grauniad there's a lucubration of letters arguing for and against creationism and whether evolution contradicts the second law of thermodynamics. Here's my favourite:

"Creationists always try to use the second law,/ to disprove evolution, but their theory has a flaw./ The second law is quite precise about where it applies,/ only in a closed system must the entropy count rise./ The earth's not a closed system, it's powered by the sun,/ so fuck the damn creationists, Doomsday get my gun!" (MC Hawking.com)
Peter Manson
Glasgow

Must get out those physics text books.
Posted by Neil at 12:22 pm No comments:

There's a a brilliant exhibition of photos from 1939 to 1943 documenting the rural poor, especially in Pie Town, New Mexico. It's on at the Photographer's Gallery in Great Newport Street, London until the 27th of January.

“I had deep sympathy for the under-privileged,resented evidence of conspicuous consumption,(and) felt the need to contribute to a more equitablesociety.“

Get yourself along to the exhibition. You are probably used to seeing the black and white images but (as the Photographer's Gallery site says) the colour ones give it a "shocking immediacy and freshness bringing to life the human cost of the Depression" .

If you want to see some of the images go to the Library of Congress, browse the Geographic Location Index for New Mexico, Pie Town. I'm unsure of the persistence of this link to New Mexico, Pie Town but here it is.
Posted by Neil at 9:13 pm No comments:

Quote of the Day

Here's a quote I came across as Rullsenberg was purging her old student files. 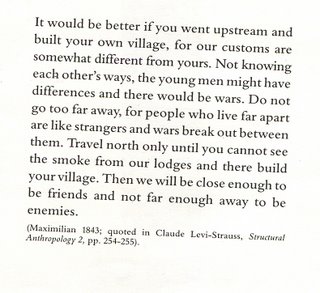 Not wanting to retype it I decided to use Rullsenberg's scanner. So there you go.
Posted by Neil at 4:54 pm No comments:

Here's a campaign worth supporting. 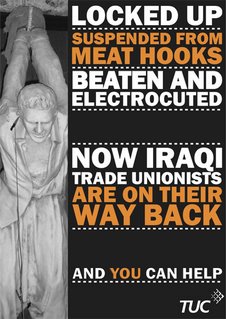 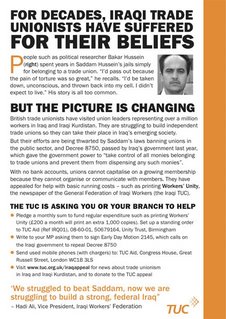 Let's hope it works and gets the coverage it deserves.

The original poster and more information is available here.

Take two. I started to write this piece and then Flash killed my browser. Damn that Gordon.

Anyway. Only the England cricket team could take their most talented bowler; their most passionate bowler to Australia and have him carry the drinks. As this splendid piece says

MONTY PANESAR has been cast as England's teddy bear, a Paddington wandering through the bad world of cricket wearing a label that says "please look after this bear". He is nothing of the kind. He is a lion. I was able to see that clearly when I faced him in the nets at the Adelaide Oval.
The nets here are visitor-friendly. I was able to stand directly behind the stumps -- the net in between us -- when Panesar was bowling.

It was an educational experience. The first thing that always gets you when you get close to any real slow bowler is that he isn't slow at all. The ball comes at you with a vicious eagerness.

Time and again, the ball came out of Panesar's enormous hands, carried on straight for a few yards and then veered in disconcertingly, seeking you out like a living thing. It then dipped, bounced and turned sharply the other way.

All this is impossible to appreciate in the two dimensions of the television or from the safety of the boundary.

And watching in close proximity, it was impossible to miss Panesar's intensity -- the massive personal investment he makes in every ball he lets go.

The intensity is not of expression and gesture; rather, it is expressed in the ball itself, something you can only see when you are just a cricket pitch away.

It is crystal clear that cricket is the breath of life to him and that bowling means a great deal more than that.

So Panesar is not the best batsman. Big deal. Get your best batsmen to bat. And then your best offensive bowlers can take wickets. Attacking cricket. Let's have more of it.