Over at the Brooklyn Rail Paul Mattick argues for the end of money:

if the whole financial system fell away, and money ceased to be the power source turning the wheels of production, the whole productive apparatus of society—machines, raw materials, and above all working people—would still be there, along with the human needs it can be made to serve. The fewer years of suffering and confusion it takes for people to figure this out, the better.

If you can't spend it money just becomes paper and metal. You can't eat it. You can't drink it. What is the point of it? Okay, you could set fire to it to keep yourself warm. But how long would that last.

Thanks to the ever perspicacious Will Rubbish.
Posted by Neil at 5:07 pm 7 comments:

Several years ago I blogged on some old notes I'd made on Mayakovsky's method. 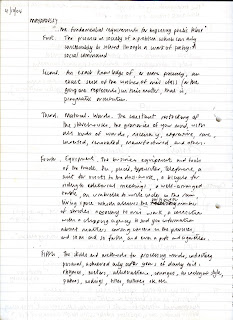 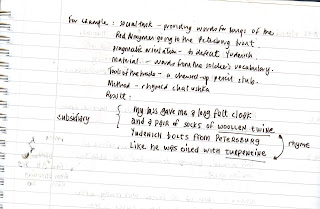 More years ago than I care to remember I was browsing in a bookshop in Hay-on-Wye and found a book called Dissenting Opinions. At the time I was on the dole and just had the cash in my pocket to buy it. It's the musings of a liberal historian called Page Smith.

Tardy as ever, I have only just discovered anything about the man. Page was born in 1917 and died in 1995, spending a long fulfilled life in academia even after almost failing his BA.

More generally he absorbed Jamesian values and attitudes - respect for human individuality, service to society, disdain for the merely respectable, abiding sympathy for the eccentric. This blended with a predisposition toward a Calvinist view of human nature, a combination often puzzling to his contemporaries and collaborators. But contrarieties and contradictions, the mysteries of human conduct, did not disturb him, and he responded feelingly to words of Walt Whitman's which conveyed this unfathomable complexity.

I particularly liked Page's Rules for Historians where he disdains the objective:

7. Never write about anything that you do not find of consuming interest, ideally, that you have not fallen in love with. It was once thought that objectivity (often interpreted as not caring) was essential to the writing of good history. The reverse is true; in Hegel's words: "Nothing great is accomplished without passion;" or, as Nietzsche put: "One is only creative in the shadow of love and love's illusions." Controlled and disciplined passion is the only proper mode for the historian.

15. Professional historians often behave (and teach) as though they thought history was something embalmed in monographs; that it had a tapeworm-like structure made up of successive monographic increments; that it is cumulative, constructed of facts and units of facts (monographs) which in time will add up to TRUTH. The fact is that history, both past and present, is almost frighteningly "open". That is to say, the past exists only in some kind of relationship to the future and, in a real sense, vice versa, i.e., it is only possible to conceive of the future in terms of the past.

16. The historians passion for explanation and for constructing casual sequences in history is a dangerous delusion. It is the product of a world view in which manipulation and control are the dominant values. It obscures the fact that the unexpected is the only certainty in history and thus leaves people unprepared to cope with that same ultimate certainty - the unexpected. The teaching of history must reflect the openness of history. This means a new way of thinking about and teaching history. Indeed, it may mean not teaching history at all - simply studying history. History, while it has been written and read since the ancient Hebrews, has only lately been taught in colleges and universities. Some would argue that its decline as a humane study can be dated from the time when it was organized into part of the academic curriculum.

This I take to mean disdain a belief in progress, and moreover a belief in the inevitability of progress. Some things get better, such as the eradication of diseases like smallpox make life now better than in the medium term past. Some things get worse, such as the immiseration of working class communities, caused by capitalism's deskilling of swathes of the workforce, in the rich Northern countries. Other things get worse like Coca-Cola's ravages in the global South.

What we need is passionate accounts of the past to guide us into the future.
Posted by Neil at 6:24 pm 1 comment:

If you don't hand over some meat and gold you'll be thrown out on your big ass in a few hours.
Posted by Neil at 3:13 pm No comments:

The Past is a Foreign Country

I have always been a great believer in nurture having the upper hand over nature in human behaviour, after all you only have to watch Trading Places to see nurture beating nature. That's just a trite pop culture example but sometimes one discovers things about oneself that only strengthen one's beliefs.

Way back when there was an organisation called the Croydon Association for Moral Welfare. Here's proof of its existence for whose who doubt the joining of the words Croydon and Moral and Welfare.

Coffee In the Morning, Coffee in the Evening

Coffee any time just as long as it ain't Starbucks. Starbucks is a determined anti-union shop, as detailed at drink soaked trots and stopstarbucks.com.

Here's a question: what's the difference between Starbucks and Walmart? The answer is that they both spend a fortune on union busting lawyers rather than concentrate on what they do, in Starbucks case, making and selling coffee.

Here's a link to the Starbucks Union which is affiliated to the IWW - Industrial Workers of the World.

This links to loads of other accounts of Starbuck's union busting activities.
Posted by Neil at 2:37 pm No comments:

Tomorrow I am going to Levellers' day in Burford, Oxfordshire.

17 May 1649, three soldiers were executed on Oliver Cromwell’s orders in Burford churchyard, Oxfordshire. They belonged to a movement popularly known as the Levellers, with beliefs in civil rights and religious tolerance.

During the Civil War, the Levellers fought on Parliament’s side, they had at first seen Cromwell as a liberator, but now saw him as a dictator. They were prepared to fight against him for their ideals and he was determined to crush them. Over 300 of them were captured by Cromwell’s troops and locked up in Burford church. Three were led out into the churchyard to be shot as ringleaders.

A good day of traditional marching and chanting and changing the world.
Posted by Neil at 2:02 pm No comments:

Here's Fidel Castro Ruz's criticism of the statement from the Organisation of American States on Cuba's Human Rights record.

In this hemisphere, the poor never had freedom of expression because they never received quality education and knowledge was reserved solely for the privileged and bourgeois elite. Don’t blame Venezuela now, which has done so much for education since the Bolivarian revolution, or the Republic of Haiti, crushed by poverty, diseases and natural catastrophes, as if any of these were ideal conditions for the freedom of expression proclaimed by the OAS. Do what Cuba is doing: first help to massively train quality healthcare personnel and send revolutionary doctors to the most remote corners of the country so that they may contribute to the saving of lives, and transmit to them educational programs and experiences; insist that the financial institutions of the developed and rich world send resources to build schools, train teachers, produce medicines, develop their agriculture and industries, and then talk about the rights of Man.

The right of freedom of expression means nothing when most of the people with that right have no means of asserting that right. That's not to say that Freedom of Expression will automatically fall, fully formed, out of a certain stage of development but it is an important part of all stages of development.
Posted by Neil at 2:14 pm No comments:

West Africa has had over 2,000 people die this year from meningitis.

More than 1,900 people affected by meningitis have died since January in the “meningitis belt” of sub-Saharan Africa, which stretches from Senegal in the west to Ethiopia in the east. In Nigeria, Niger, and Chad alone, more than 56,000 cases of meningitis have been recorded in the areas where Doctors Without Borders/Médecins Sans Frontières (MSF) medical teams, working alongside Ministry of Health staff, are treating sick patents. They are also vaccinating more than seven million people, making this the largest vaccination MSF has ever carried out.

Currently, dozens of MSF teams together with health authorities are performing vaccination campaigns throughout these countries to reduce the impact of the epidemic. Meanwhile, other MSF teams are travelling to urban and remote health centers to collect data, review and treat patients, and donate medicines.

The increasingly maligned and neo-liberal Europeam Community has

allocated 4.7 million Euros to eradicate meningitis in Nigeria and Niger as well as support the Economic Community of West African States in preventing conflict and enhancing good governance.

So what is the split between money for vaccines for meningitis and money for preventing conflict and enhancing good governance?
Posted by Neil at 9:35 pm 1 comment:

May Day in Caracas

I wasn't there but there's a good report at Venezuela Analysis.

The National Front of Bolivarian Workers march, supported by the National Union of Workers (Unete, which split from the CTV after it supported the coup against Chávez in April 2002), the Socialist Confederation of Workers (CST) and the Cruz Villegas current of the Confederation of United Venezuelan Workers (CUTV), began at three different points in Caracas then converged on Avenue Urdaneta, extending a kilometer and half as participants listened to a range of speakers and bands.

Marchers interviewed by national channel VTV expressed repeatedly that they were out marching in order to support the revolutionary process and the Chávez government.

President Hugo Chávez, addressing the large crowd said, "There's no socialism without the working class... solid, conscientious, and committed to what is being born in Venezuela, which is Socialism."

"The happiness and passion in the streets of Caracas [today] and the excellent transmission by [community and government run media] VTV, TeleSur, TVes, Radio Nacional, YVKE Mundial...affected me so much that although it wasn't planned that I would speak today, the enthusiasm motivated me."

That's like Fidel Castro announcing "unaccustomed as I am to public speaking I'll be brief".

The attempts of the Bolivarian Revolution to overcome Venezuela's problems by reducing poverty, increasing education resources, and increasing the rights of the poorest Venzuelans are to be applauded.
Posted by Neil at 12:14 pm No comments: