This Saturday I had a grand day out in Derby. I went to the Silk Mill Procession which is

a trade union commemoration of the struggle of the Derby Silk Mill workers of 1834.
At 10.30am in Derby’s Market Place, join the traditional silver band led procession with your banners, or with your family and friends, in recognition of the long
and radical history of Derby workers. At the end of the procession at the Silk Mill
gates rally, a chaplet will be laid at the plaque commemorating the 1834 struggle, and there will be trade union and labour movement speakers and lusty renditions of 'The Red Flag' and 'The Internationale'.

Here's the start of the march. 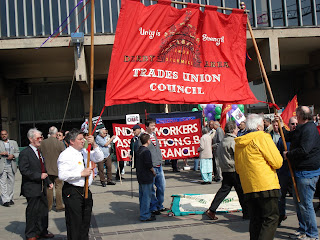 The sun shone as we marched to the Silk Museum. 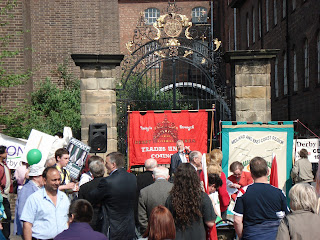 We passed various traction and steam engines. We listened to a cracking speech from the local PCS rep arguing for the retention of tax offices, and tax jobs, in Derby and against the proposed move to Nottingham (sorry but I couldn't find a link). We listened to Margaret Beckett, and a heckler. We heard a passionate speech from Graham Stevenson arguing that "if socialism is not the answer then there is no answer" to the world's problems. Indeed.

We then had a brass band play the Red Flag, then the Internationale. Then a steam organ started up playing Rule Britannia. Was this deliberate? Who knows?

And so to the Silk Mill pub for a talk by Graham Stevenson on Derby working class history. 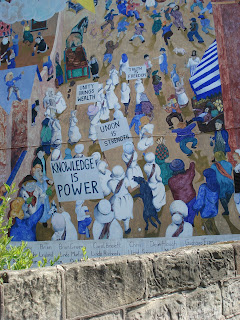 A bit of history over a pint of real ale. What more could you want?
Posted by Neil at 9:52 pm No comments:

Don't people accumulate some junk? I've been going through a folder of pamphlets picked up over the years and I found "The Red Review Songbook 1985". Thought I'd copy some of them here. 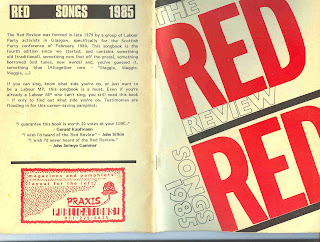 Here's the first songs, The Red Flag and The Internationale. 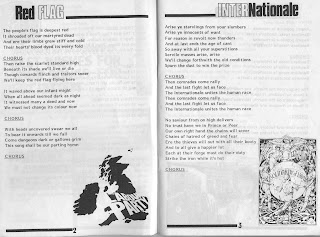 And here's "I Have a Dream", a song that evokes dreams betrayed. 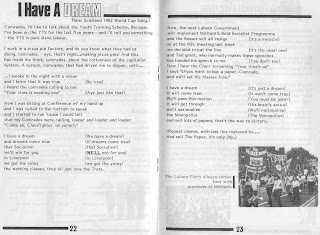 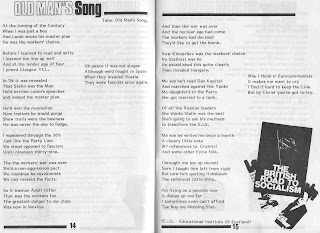 Nostalgia. A simpler time when the opposition was the opposition. When the enemy was the enemy. The joys of opposition politics. Jumpers for goalposts.
Posted by Neil at 4:03 pm No comments:

I was expcting to go to two gigs next week. But after Einsturzende Neubauten were forced to pull out (concert interruptus) I've got just one to go to, Low. Here's a video.

Looks like the Einsturzende Neubauten gig at Rock City, Nottingham next Thursday 26 April, has been called off because not enough people wanted to go.

I was first in the queue (ahem) on the 22nd of January. Tickets numbered 10 and 11. What a night that's going to be. I evangelised to everyone I know with even a vague interest in what I call music. Some expressions of interest.

Only to find out that Rock City can't sell enough tickets. What a let down. The idle, ignorant, musically challenged folk of the East Midlands don't know what they've missed. Who could turn down the opportunity for a night of German muttering and clanking? (Obviously almost the entire population, apart from me and Rullsenberg, of the East Midlands).

So I'm at a loose end on Thursday when I should have been listening to sounds like this.

But on Wednesday I have got another gig to go to.
Posted by Neil at 8:45 pm No comments:

Has anyone seen the new Adam Smith twenty pound note? Rullsenberg has but every time I've been to a cash machine or asked for cash back at a supermarket I've been given either tens or tens and an old crinkled twenty.

Nostalgia corner, but I can recall the introduction of the twenty pence piece. It was ages before I saw one of those. Then I was one of the last to see a pound coin. As for the two pound coin, they were a year old before I got my grubby mitts on one.

A Visit to Iraq

Harry Barnes gives an informative account of a trip to Iraq he made in 2006.

In this piece he recalls meeting Najim Abd-Jasem, who was kidnapped, tortured and murdered at the end of March 2007. Until his murder, Najim was the General Secretary of the Mechanics, Printers and Metalworkers Union in Baghdad.

Najim had been an active member of the underground Workers' Trade Union Movement during Saddam Hussein's rule and had struggled against the regime, losing his employment as a consequence.

Those seeking to create a better world in Iraq are being targetted by the so-called "insurgency" who see a non-sectarian future as a bad thing.

(Thanks to Will Rubbish)
Posted by Neil at 3:53 pm No comments: 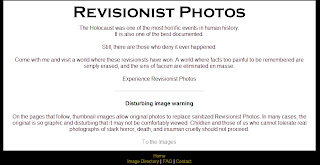 It makes uncomfortable viewing, as it should, but I found some of the images worthwhile and informative viewing. Move your cursor over the thumbnail to see the removed section of the image. The site is revisionist photos.
Posted by Neil at 2:48 pm No comments:

It's time to empty the midden of fascists and fascist supporting scum.

Great idea thanks to the Scottish Co-operative Wholesale Co-operative Republic (SCWR).
Posted by Neil at 2:21 pm No comments:

According to Nicholas Wroe in the Guardian at a talk at the ICA with Slavoj Zizek, Gerry Cohen called a philosopher "an extremely unpleasant man".

Searching for the name of the philospher drew a blank. However I visited Lenin's Amusement Park, and a piece on labour strikes and uprisings in Egypt aiming to overthrow the corrupt regime of Mubarak. Lenin reports on

Recently, a remarkable article in Merip's Middle East Report by Hossam and Joel Beinin, discussed how Egyptians workers are challenging not only Mubarak's deep-state, but the whole economic order that the US seeks to impose. The privatisation drives, the cuts to wages and the attempts to reduce social protections for workers established under Nasser, have all provoked the fierce strike waves that have intensified even while state terror has intimidated opposition groups.

labor activists and strike leaders in the textile and railway sectors frequently mention the phrase “independent parallel national labor union.” Various leftist organizations are talking about building such a thing: the Trotskyist Revolutionary Socialists, the Nasserist Karama Party, the remnants of the Egyptian Communist Party, the People’s Socialist Party, the Center for Trade Union and Workers’ Rights, and the Workers’ Coordination Committee. (Nearly absent from these deliberations is the “legal left” Tagammu‘ Party.) As of yet, however, there are no concrete plans.

The success of such endeavors will depend on whether industrial militancy is sustained, whether political activists can intervene in the strikes and whether workers can establish effective coordination among themselves. It will also depend on whether the Misr Spinning and Weaving workers indeed manage to withdraw from their government-dominated union. If they do score a victory against the union bureaucracy, other workers will be encouraged to emulate them. It is no secret that there is tremendous frustration with union leaders among the rank and file in the railways and other sectors.

Because of the high price of oil and receipts from the sale of public-sector firms, the government has significant cash reserves and can afford to meet workers’ bread-and-butter demands. It has done so in the hopes that workers will return complacent to their jobs. But some workers, and it is not yet clear how many, have begun to connect their thin wallets with broader political and economic circumstances -- the entrenchment of autocracy, widespread government incompetence and corruption, the regime’s subservience to the United States and its inability to offer meaningful support for the Palestinian people or meaningful opposition to the war in Iraq, high unemployment and the painfully obvious gap between rich and poor. Many Egyptians have begun to speak openly about the need for real change. Public-sector workers are well-positioned to play a role if they can organize themselves on a national basis.

There are many things wrong in Mubarak's Egypt (incompetence, corruption, torture, authoritarianism to give an incomplete list) and overthrowing the government may the only way to fix them.