On the importance of knowing stuff

I was reading an old Joel on Software article on software, for the day job, and saw this peach of a quote.

People who only know one world get really smarmy, and every time they hear about the complications in the other world, it makes them think that their world doesn't have complications. But they do. You've just moved beyond them because you are proficient in them. These worlds are just too big and complicated to compare any more. Lord Palmerston: "The Schleswig-Holstein question is so complicated, only three men in Europe have ever understood it. One was Prince Albert, who is dead. The second was a German professor who became mad. I am the third and I have forgotten all about it."

That's similar to the tale of Arthur Eddington.

[Eddington] was an early apologist of Einstein's General Relativity, and an interesting anecdote well illustrates his personal intellectual investment: Ludwig Silberstein approached Eddington at the Royal Society's (November 6) 1919 meeting wherein he had defended Einstein's Relativity with his Brazil-Principe Solar Eclipse calculations with some degree of skepticality and ruefully charged Arthur as one who claimed to be one of three men who actually understood the theory. When Eddington refrained from replying, he insisted Arthur not be "so shy", whereupon Eddington replied, "Oh, no! I was wondering who the third one might be!"

Music of the Future

Tonight I am off to see the poetic Dan le Sac vs Scroobius Pip.

Next week I am off to see A Silver Mt Zion Memorial Orchestra and Tra-La-La Band. 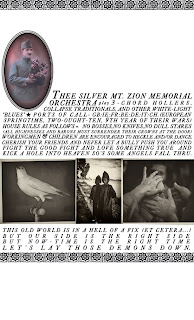 At the moment I am reading the Martin Beck Police Mysteries by Maj Sjowall and Per Wahloo. The series was wriiten in the 1960s and 1970s by a couple of Marxists who used detective fiction to reveal the state of Swedish society under capitalism.

The book I am currently reading is "The Abominable Man". On page 96 of the Vintage Crime/Black Lizard edition (2009) there is this quote:

Then he looked suspiciously at the stamp. It was rather pretty, with a picture of a bird. It belonged to a series of newly released stamps which, if he understood the thing correctly, guaranteed that letters bearing them would be conveyed with special sluggishness. The kind of sublety so typical of the post office.

Recently the Royal Mail has been criticised for failing to deliver one in four first class letters on time. See this Torygraph report.

This report being in the Torygraph it stresses that the strikes, together with management failure to plan for the disruption, were to blame for the performance failure.

Nigel Woods, of Consumer Focus, said: "Whether or not these results are down to industrial action, consumers were let down by Royal Mail last autumn.

"The figures are similar to those recorded during the industrial action of 2007-8 and show how important it is for Royal Mail to resolve their industrial relations problems once and for all.

"It also shows that Royal Mail's contingency plans have not stopped severe service disruptions from taking place during strike action.

So, to summarise, the stike caused the disruption which wouldn't have been as bad if management had arranged a massive scabbing operation.
Posted by Neil at 12:45 pm No comments: