Critical thinking and philosophy in schools in schools is an idea whose time is now. That's the gist of a letter in today's Guardian.

Combine that with a course in scientific method, experimental design and enough statistics to keep the Polyethylene terephthalate (PET) fleece being pulled over people's eyes and that's a basis of a winning curriculum.

I couldn't agree more. Critical thinking and philosophy is vital to the well being of a society. If only some of the signatories followed some of the basic rules of logic. A recent issue of Chartist has Bob Brecher's and Phil Vellender's essay on Capitalism and Immorality. I believe that capitalism is immoral but providing a watertight argument why it is is harder than it seems.


"Act in such a way that you treat humanity, whether in your own person or in the person of any other, always at the same time as an end and never merely as a means to an end."


"Kant's principle seems undeniable (try it). To be a person – to be recognised as such and not just a member of the species, Homo sapiens — is already to have a moral and political status. A person's life isn't merely a means to another's, or their own, ends. So if you deny Kant's principle, you're denying that you're a person - that's a contradiction."

Brecher here constructs a syllogism whose premises are: to be a person is already to have a moral and political status; a person's life isn't merely a means to another's, or their own, ends; therefore we conclude with Kant's Categorical Imperative. To deny the Imperative is to deny the premise. But the second premise is just a paraphrase of the conclusion. This is like saying X is a number; X is 3; therefore we conclude that X is 3. To deny that X is 3 contradicts our second premise.

The argument is guilty of assuming what it is trying to argue for. Avoiding the Latin, petitio principii, this is begging the question, and makes for an invalid argument.

As an aside it is important to realise that it is only in the 20th century that women were considered as persons in English law.
In the LRB, Vol 33 No 9 28th April 2011, Stephen Sedley wrote of


"When Parliament gave women the right to stand for election, Lady Sandhurst was unseated from the London County Council by an opponent who claimed that, not being a person, she could not be ‘a fit person of full age’. But when a Miss Cobden was elected and waited till the time for challenge was past before taking her seat, she was promptly prosecuted for being a person sitting as councillor when unqualified. She put up the seemingly impregnable defence that if she was not a person for the purpose of being elected she could not be a person for the purpose of being prosecuted. Naturally, she was convicted."

I think that Kant's Categorical Imperative is a fine formulation for treating people, but I bet Thomas Jefferson, a slaveholder, could have adhered to the imperative, barring an accident of chronology. If you don't see all people as persons then the Imperative can easily become justification for slavery, concentration camps and Fascism. Persons are well treated, as ends and not merely as means, but people are treated however the order of the day sees fit, often merely as means.
Posted by Neil at 7:13 pm No comments:

Something we didn't do in San Francisco 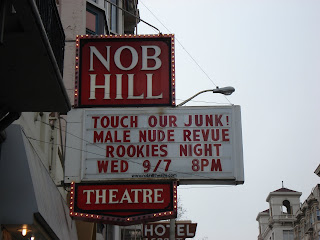 I was home by the date in question.
Posted by Neil at 8:48 pm No comments: 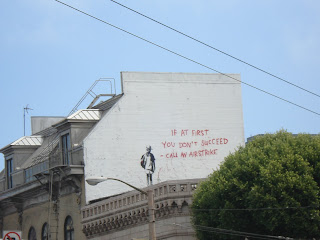 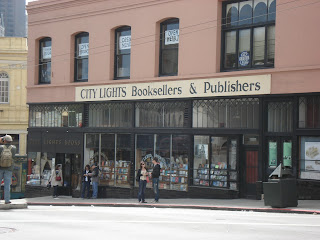