Remembrance is one of those human actions that we do in quiet moments. Remembering friends and family who are no longer with us. Remembering those who sacrificed themselves to a cause that hoped to change the world. Remembrance for what may have been if they had not volunteered.

Memorials should be there as a motivation to remember. Sometimes remembrance is provoked by seeing something you see everyday in a fresh light. Last year some friends and I parked at County Hall Nottingham to watch a cricket match at nearby Trent Bridge.

On the way back we noticed a memorial to International Brigade volunteers from Nottinghamshire:

They went because their open eyes could see no other way. 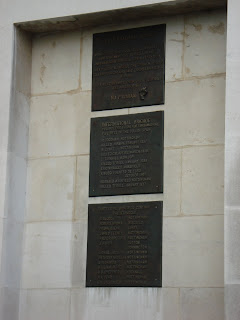 To the right of these three plaques is a sculpture by the artist Michael Johnson, unveiled by the Spanish Ambassador on the 4th of September 1993 in front of nearly fifty surviving International Brigade volunteers.

The sculpture "depicts bombarded buildings similar to the ones that still remain in the Spanish town of Belchite". 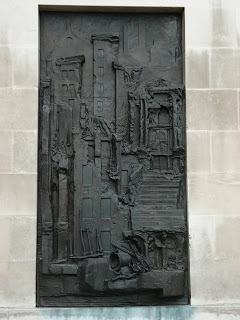 This monument is now under threat from ideological vandalism. Spoiling the view of the International Brigade memorial is a new brass plaque proclaiming "In proud and grateful memory of the men and women of this county who have sacrificed their lives for others and for freedom. We will remember them." 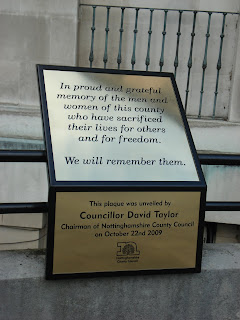 On first reading that's fine. On second reading the use of "freedom" seems to be there as a deliberate counterpoint to the "liberty and peace" of the International Brigade volunteer memorial. "Freedom" is a term laden with meaning. Everyone "knows" what it means. Few people are prepared to unpack what it stands for.

A spokesman for Notts County Council said: "We're not removing the Spanish Civil War Memorial. It's a beautiful piece of artwork at the front of County Hall.

"We are replacing the information board, which replicates the text on one of the plaques, with a brass memorial plaque which will remember all of the people from Notts who lost their lives in service of their country.

Just a couple of points. The "information board" gave background information on the Spanish Civil War and I find it helpful when I see a sculpture memorializing an event to have some historical information. By providing historical context the information board prevents the memorial becoming just another piece of street furniture.

And there is nothing on the brass plaque about "in service of their country". As the text stands it could be in honour of anyone from Nottinghamshire who believed they sacrificed their life in the cause of "freedom". It could honour anyone from Nottinghamshire who died for a cause, whatever the cause. Because it is such a generic, broad and bland statement that covers everyone who has died for a cause it detracts from the specific anti-Fascist sacrifice of the Nottinghamshire International Brigade volunteers.