After looking at the Toronto Star for the last piece I noticed a piece on the sad death of Bob Woolmer. Now it has been confirmed that he died of "asphyxia as a result of manual strangulation" this has become

a mystery dripping in blood, passion, money and underworld intrigue. All that's missing is sex, grassy knolls and CSI: West Indies. But you never know. There is more, much, much more, to come.

Was it down to gambling? A disgruntled fan? Match fixers? Who yet knows? It's a sad week for cricket and for friends and family of Bob Woolmer.
Posted by Neil at 6:48 pm No comments:

Police said today that children were used in a weekend car bombing in which the driver gained permission to park in a busy shopping area after he pointed out that he was leaving his children in the back seat.

The driver then ran away and detonated a bomb, killing the children and eight bystanders.

Encyclopedias from 1933 and Marx

My parents had a set of the New British Encyclopedia (Illustrated) published by Odhams Press in 1933. Several years ago this set passed into my hands.

I have always found it fascinating. Now I have a scanner I will put a selection of articles on my blog. The first entry will be that of Karl Marx. 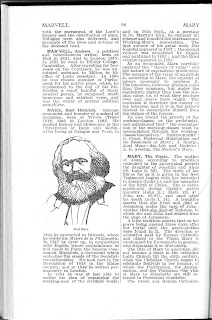 That should be readable if you double-click on the image.
Posted by Neil at 8:45 pm No comments:

Several months ago I moved offices. At my new desk I noticed my new neighbour sketching. On his pad was a sketch of my right ear. He's just given me a picture of what he did with it. 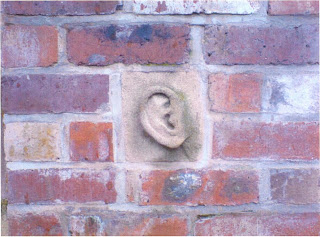 It's now been a fortnight since I last blogged.

And my work pc consistently fails to open the Blogger Beta login screen to request a username and password.

Trident is a waste of money and so is it's replacement

The validity of Mutually Assured Destruction was unproven at the height of the Cold War. Now, in an age of asymmetric warfare and irrational "players" it won't work.

"Ah. But I am going to get my reward in the next world and I'll have destroyed you. I win."

To such an idea M.A.D. means nothing.

Last weekend I was in Trafalgar Square when the demo against the Trident replacement, against attacking Iraq and for withdrawing troops from Iraq was on.

The Metropolitan Police gave reports of 2000 - 3000 people on the march.
The Stop the War Coalition reported 100,000. Given the capacity of Trafalgar Square is 50,000 and it was not full I'd say there about 20,000 to 30,000 there, tops. There's a discussion about it essentially upping the figure to agree more with the StWC here.

Here's some pictures of the demo taken on my new camera. 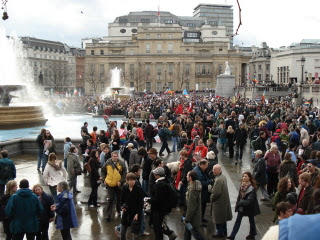 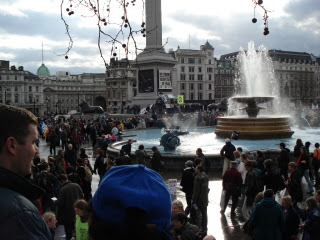 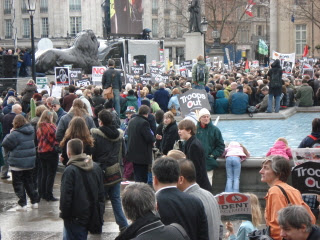 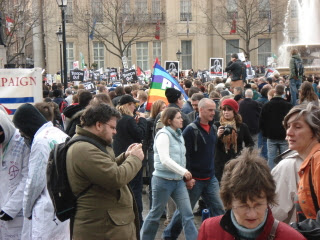 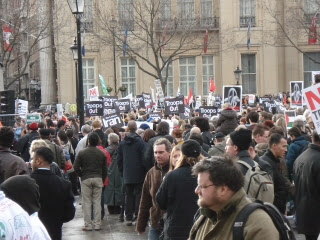 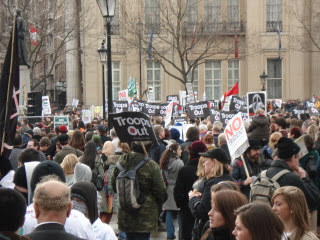 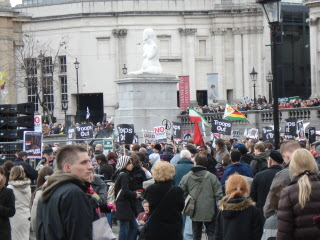 There was more than enough room to wander freely and swing (whatever you felt like swinging). Nobody felt squashed. It was one of the sparser attended demos I have seen.
Posted by Neil at 7:03 pm No comments:

One of the joys of browsing market stalls and bookshops is coming across small magazines. Last weekend I found a copy of a fascinating magazine: Smoke a London Peculiar.

In issue 9 there's a splendid piece on St Giles Circus (where Chraing Cross Road meets Oxford Street and where Centrepoint is) and psychogeography, by Smoke's editor, Matt Haynes:

It's a true and fascinating fact, for instance, that the churches of the City and East End are aligned in triangular grids whose basic unit of measurement is taken from the dimensions of the Temple of Solomon in Jerusalem. But it's not true because there's anything mystical about triangles or Jerusalem; it's true because architect Nicholas Hawksmoor was bonkers.

Small magazines are one of those things that make life worth living. That sharing in someone else's enthusiasms makes you feel glad to be alive.
Posted by Neil at 4:35 pm No comments:

With the Iraqi insurgency aiming to disrupt everyday life for Iraqis one of their main targets is schools.

A group of Iraqi teachers is currently visiting the UK. The Iraqi Federation of Trade Unions (IFTU) reports

Ali Ahmed Sindal, aged 63, a school inspector, checks on his three sons and daughter every day after work. But Ahmed, who spent four years on death row under Saddam Hussein, was hopeful: 'We are optimistic that all these things will be ended within one year, two years, three years. Then we are expecting a new life, a better life.'

In the meantime, the teachers want to keep improving the country's education system. Mahdi, who has brought the teachers to Britain with the support of the Iraqi Federation of Workers, said he was still planning strategies for teaching a year in advance despite the trouble.

'These people who attack education, attack schools and teachers have nothing in their heart but hate and violence and they want the destruction of Iraq. They have no sense of humanity.'

Teacher Mohamed Seed Hatem said the situation today 'was still better than it was. A bloody dictatorship has gone.'

That's a spirit of optimism to shame those who see only things getting worse.
Posted by Neil at 12:40 pm No comments:

On 23rd February 2007 US and Iraqi security forces raided the headquarters of the General Federation of Iraqi Workers (GFIW).

Labour Start has a campaign where you can email your condemnation of the raid.