A second hand book store owner has started to burn books he can't give away. When he wanted to thin out his stock libraries didn't want them, thrift stores didn't want them. Tom Wayne, owner of Kansas City's Prospero's Books, saw burning books as a protest against declinining support for the printed word. His colleague said "There are segments of this city where you go to an estate sale and find five TVs and three books". That's tragic. Is it really the case that not reading a book is as good as burning it? I don't think so. A book shelved has the potential to be read. A book burned can never be read. Many books are read and then recycled. How many Tom Clancy novels does the world need?

That second hand book shops are closing down is a cultural tragedy. That people aren't reading as much as they did once in a golden age of literacy is another cultural tragedy. Are those who still read reading better books? Reading Adorno over Adams (but there again, Douglas Adams and Henry Adams are both worth reading)? Reading Althusser over Debord, or even Debord over Althusser.

Notebooks and the social command

I was tidying up and reviewing some old notebooks when I found some notes I'd made on Mayakovsky. Can I find where the notes are from? Can I heck. But here are the notes. Someone may know from whence they came. Probably not some dizzy whore in 1804. 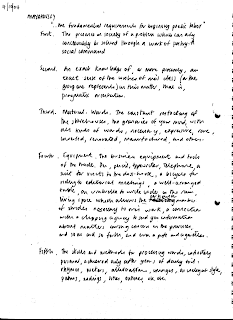 At the Chesterfield May Day rally there was ideology and newspapers on sale like biscuit and cakes at a CWI fete.

I bought The Proletarian sold by the CPGB-ML, who are a bunch of unreconstructed anti-imperialist non-revisionist Communists who left Scargill's Socialist Labour Party because of its commitment to social democracy.

The CPGB-ML was set up in July 2004 by a group of committed communists who had either been expelled or had resigned from the Socialist Labour Party. It was set up in recognition of the fact that there was no existing party in Britain that carried a consistently Marxist-Leninist, anti-imperialist, anti-social democratic political line. It was, and is, the unshakable conviction of these comrades that only such a party can develop into a genuine working-class vanguard.

And they unconditionally support Mugabe in Zimbabwe, Kim Jong Il in DPKR and the memory of Saddam Hussein in Iraq. There's a strong overlap with the Stalin Society which

was formed in 1991 to defend Stalin and his work on the basis of fact and to refute capitalist, revisionist, opportunist and Trotskyist propaganda directed against him.

The leadership of the Labour Party and the trade unions, which are very similar, have exercised a most harmful influence on the working-class movement in Britain. The old CPGB, under the guidance of the Comintern, was able to make deep inroads into the working-class movement, but that party went revisionist with the ascendancy of Khrushchevite revisionism in the CPSU(B) from 1956. In 1989, the CPGB dissolved itself and passed a resolution saying that the October Revolution had been a “mistake of historic proportions”.

In these circumstances, we picked up the banner of Marxism Leninism and tried to build a movement. We are trying hard to dig deep roots in the working class, with very limited success so far. With increasing imperialist attacks on the working class at home and the oppressed peoples abroad, people are beginning to listen to us. We are working hard to develop trade union and working-class work, but a lot has to be done.

So is the CPGB-ML going to win over the British working class to its program? Join us next week to find out. Erm. That may be postponed to next year. If you can't wait to find out just read The Proletarian.

As A Very Public Sociologist says the presence of smaller groups make the British left a fun place to be. Diverse ecosystems are good and that extends as much to a political ecosystem as to any other.
Posted by Neil at 2:19 pm No comments:

Laggardly posting of Chesterfield May Day

Last monday, 7th May 2007, Rullsenberg and I went to Chesterfield for the May Day Rally.

Here's the brass band before the march. 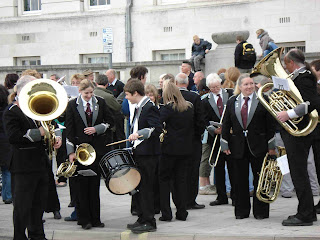 Here's the gathering of the banners, with what looks like an old NHS bed. 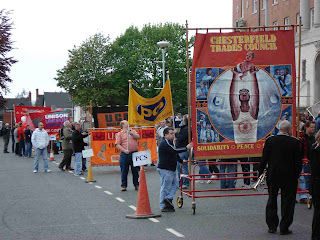 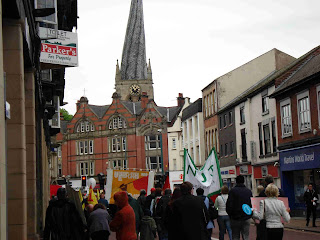 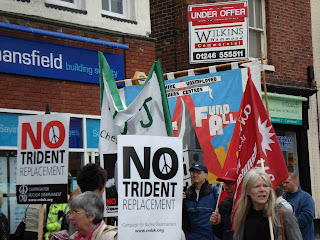 And at the end of hte march the sun came out. And there's more in the next post.
Posted by Neil at 10:21 am No comments:

Just found this picture, by Rory Hanratty, of a new street sign in Belfast. 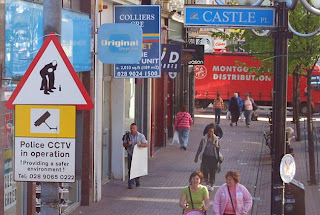 Could we make this a nationwide thing?
Posted by Neil at 10:15 am No comments:

Via DSFTP here's The Nietsche Family.

The press, the machine, the railway, the telegraph are premises whose thousand-year conclusion no one has yet dared to draw.

There's one for you. Just hit refresh and gaze into the abyss.
Posted by Neil at 1:44 pm No comments:

All the world's a stage and here's a drill

Back in February artist Jo Mitchell recreated Einsturzende Neubauten's famous gig , Concerto for Voice and Machinery, at the ICA in 1984 where they had a cement mixer, electric drills and jackhammers. The recreated gig was supported by an industrial tool hire company, as it would be.

Because we were using petrol-driven chainsaws, very soon the whole room was filled with smoke, the stench of petrol everywhere. It sounded like a cross between a building site and war. Because I was very young, the others wouldn't let me near the heavy machinery so I stood, wearing protective gloves and a visor, throwing milk bottles into the cement mixer, which smashed and flew into the crowd.

But we would have kept it pretty straightforward if we weren't inspired by the reaction of the audience. There's a famous Walter Benjamin essay about the destructive character, and he says: "The destructive character knows only one watchword: make room. And only one activity: clearing away." And that's how it was. We were thinking, "Actually, it's not us doing anything. The audience are tearing the place apart!" People were fighting over the drills and sledgehammers. Cables and machinery were pulled into the audience.

The thing about these situations is that no matter how wild it gets, people do instinctively take care of each other. I'm sure there were moments when we thought it was getting out of hand but it was all so quick, it went "Snap", like a switch being flicked and everyone going berserk.

Myth and reality often clash. According to Mick Sinclair's review of the original gig, in Sounds, and in Mick Sinclair's letter to the Grauniad it was not a Neubauten gig but a performance that featured some of the band members. So there, all you mythologisers who mythologise with your pens, your chance is over, it won't come again.
Posted by Neil at 8:58 pm No comments: