Via the informing, educating and agitating Counago and Spaves I have restarted listening to the wonderful Three Johns.

Looking at my bookshelves was starting to get depressing. So many books I have not touched in years. So I decided to donate to my local Oxfam book shop.

That is, of course, assuming they are sellable. Some were quite expensive like Operating System Concepts by Silberschatz and Galvin. I bought that ten years ago when I was a software engineer and had to know those things. Now I'm a DBA operating system fundamentals aren't as important as they used to be.

Carrier bags of heavy computer books are waiting by the front door for me to take to work tomorrow. From work I will lug them to my local Oxfam.

Immigration controls pander to racists. That's a simple enough idea. "Oh, the neighbourhood is changing its character, let's stop people like that coming into the country". And the politician seeking votes for his party stands and demonises others. And people read the unspoken racist sentiment. Some agree. Some disagree and say that immigration controls are wrong. Free movement of labour is the corollary to free movement of capital. It's one of the good parts of the free market neo-liberal package of ideas that's worth keeping. And it's the right thing to do.

Given Reid's political background*, his recourse to and enthusiasm for racist immigration** controls to restrict the movement and activities of those the Home Office considers 'undesirable' - a method which unjustly oppresses the innocent and seeks to make the guilty someone else's problem: a pointless exercise in the era of international travel and global communications - is entirely unsurprising. If people commit, or are conspiring to commit criminal acts, evidence of their malfeasance should be gathered and presented as evidence in the criminal courts, and, once convicted they should be imprisoned. When their sentence has been served, they should be released. Criminal behaviour must be dealt with by criminal sanctions, not by racist controls.

When I was a part-time student, and unemployed, I used to spend my days studying, reading and applying for the occasional job. One of the books I read was The Bombardiers by Po Bronson. As high powered romps go it went. If you're interested it's about bond traders and the publisher's blurb says

"the sales manager [is] so overwhelmed by corporate ambition that he forces his traders to sell more bonds than they can handle. As the deals swirl, faster and riskier and bigger, the transactions become increasingly bizarre: shifting around the debt of failed savings and loans, financing investment in bankrupt Eastern European nations, and, finally, arranging a corporate takeover of certain assets in the Dominican Republic (in this case, the entire country)."

Anyway the story is not the point of this post. Trawling through a box of index cards I found this, taken from the book.
It purports to be a summary of Information Economics. As a summary it seems to work. I post this because I saw recently someone arguing that the Bank of England should have kept its deal with Northern Rock secret to stop depositors worrying and starting a run on the bank.

Is it good for public bodies to keep their major deals secret? Or is it a part of an older more circumspect way of business that is thankfully gone? Openness in government is a good thing. Let's have more of it.
Posted by Neil at 8:00 pm No comments:

Everyone has heroes. Sometimes you find they have feet of clay [cliche alert].

A hero of mine is Orson Welles. In last week's LRB there's a review, by J Hoberman, of several biographies. Here's a quote.

As Welles was editing The Lady from Shanghai, the House Un-American Activities Committee turned its attention towards Hollywood. The FBI, whose files described Citizen Kane as ‘nothing more than an extension of the Communist Party’s campaign to smear one of its most effective and consistent opponents’, namely William Randolph Hearst, had long been interested in Welles. He was regarded as a threat, and placed on the FBI Security Index largely because of his political activities on behalf of the committee organised to defend the beleaguered Communist labour leader Harry Bridges and the 17 Mexican-American youths charged with murder in the 1942 Sleepy Lagoon case.[†]

Welles submitted himself to the 1947 interview with Hedda Hopper, a red-baiting ally of the FBI, in an attempt to get right with the authorities: ‘I’m sick of being called a Communist,’ he protested. ‘It’s true that I’ve worked for some of the things the Communist Party has advocated. But that was merely coincidental. I’m opposed to political dictatorship [and] organised ignorance.’

Let's say that I dispute his disavowal of being called "a Communist" but agree with "I’m opposed to political dictatorship [and] organised ignorance".
Posted by Neil at 3:58 pm No comments:

Cricket in the U.S.A

Beyond A Boundary is my favourite sporting book. It is also pretty damn good on culture and society.

Humanistic Academia (I use this phrase as it always irritated me to read in reviews books described as "a must read for students" when I could not see many science students, apart from myself, ever reading it. I was the student who read so widely around the subject he forgot the subject, but that's for another discussion) in the USA loves CLR James.

Unfortunately the centrality of cricket and cricketing analogies to Beyond A Boundary means it is the neglected work.

cricket was, as it happens, the first modern American team sport -- which is to say, a sport properly organized and monitored. Benjamin Franklin was very interested in cricket, and by 1779 at least two teams, Brooklyn and Greenwich, were turning out regularly. More teams sprang up, and in 1838, the first formally constituted club, the St. George Club of New York City, came into being. Matches for money were played: In 1844, a Toronto team won a $1,000 purse in front of several thousand spectators in New York. Most of the players were British expats, but in Philadelphia, significant numbers of homegrown Americans took up the sport as an elite pastime and produced great cricketers and great clubs.

O'Neill then argues that

Using cricket to blur boundaries between white and black, colonized and colonizer, an-cient and modern, political and social, [James] stages a brilliant attack on "that categorization and specialization, that division of the human personality, which is the greatest curse of our time." His concern was profound and by no means abstract. Are there more-consequential divisions of human personality than the ones currently imposed by religion and nationality?

The trouble, of course, is that Americans, even if they are Americanists, can't read Beyond a Boundary. They can follow the words, but with what prospect of understanding them? How could their reading not be riddled with misconceptions, guesses, gray areas? E. P. Thompson once remarked, "I'm afraid that American theorists will not understand this, but the clue to everything lies in [James's] proper appreciation of the game of cricket." Unfortunately, he was right.

O'Neill ends with the Jamesian line, borrowed from Kipling, "What do they know of America who only America know?" Indeed.

We Care, We Care A Lot

Eric Lee and LabourStart are campaigning with Unison in support of care workers in Barnet. The workers work for Fremantle Care a not-for-profit trust that is seeking to slash wages and impose worse terms and conditions.

On their website Fremantle have the usual managerial vision and values section that says their vision is to "To develop the skills and qualifications of our dedicated workforce" and their value is to "Encourag[e] every member of staff to contribute fully". Fishcakes.

Fremantle have tried to shut LabourStart down. Eric Lee writes:

The campaign we launched a little more than a week ago in support of low-paid workers in care homes in north London has generated more support than any other campaign we have ever done.

Already, well over 8,100 messages have been sent to the employer. This is even bigger than our 2005 campaign in support of the Gate Gourmet workers, which was a much more widely publicized dispute in the mainstream media.

As we mentioned in this week's message, the employer reacted swiftly and brutally -- first threatening us with a libel action in the English courts and then sacking a union rep.

And then on Thursday, in an unprecedented move, the employer (Fremantle Trust) contacted our internet service provider and demanded that they shut down the campaign or else face a lawsuit themselves.

We were contacted by the legal department of the internet service provider and told that we had until noon on Friday to close down the campaign or else the entire LabourStart site would be shut down.

We worked very hard over those 24 hours to attempt to get our provider to back down, and had the full support of Unison (Britain's giant public sector union, whose members are at the center of the dispute) but were not successful in doing this before the noon deadline on Friday.

As a result, at 11:59 on Friday we were compelled to shut down the campaigns.

But -- we instantly revived the campaign in nine languages on a different server, in a different country, with a new name that reflects our feeling at this time.

The new site is called "We will not be silenced!" and is located, appropriately enough, at http://www.wewillnotbesilenced.org/

If you have not yet sent off your message of protest to Fremantle, please do so from the new page.

Remember that you can use our system to send out your own message to the chief executive of Fremantle Trust -- and you can tell her, if you wish, what you think of this attempt to silence our campaign.

Please also inform all your lists and every trade unionist you know to use the new site to send a loud and clear message to this employer.

If Fremantle Trust were unhappy to receive 8,000 emails, how are they going to feel about getting thousands more in the next few days? Because that is exactly what is going to happen. We will not be intimidated, we will not be bullied, and we will not be silenced. The campaign continues.

Nick at 4glengate points out that LabourStart is working on behalf of Unison but Unison refuses to fund LabourStart becuase of Eric Lee's position on Israel. Hmm.

Now we have LabourStart playing an important role in a crucial UNISON dispute, at the request of the union. For my money, this just shows that the union leadership had no intention of actually carrying out the boycott decision, but that means the whole debate at conference was dishonest. I hope LabourStart's role in this campaign will help to set the groundwork for the boycott motion to be overturned next conference.

That partly explains why I joined the GMB when I recently began working in local government. I know the GMB has its own internal issues but it's not UNISON.
Posted by Neil at 7:27 pm No comments:

I've been away from work for three weeks. Just over the road from my office is Trent Bridge cricket ground home of Nottinghamshire County Cricket Club. Today I went past the ground for the first time in three weeks.

The Musters Road stand had been demolished. 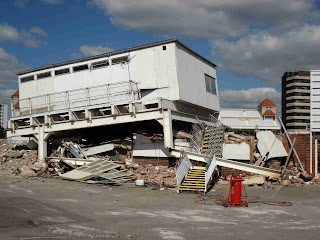 The plans are online here.

What a difference three weeks makes.
Posted by Neil at 7:31 pm No comments:

Wandering by the Arts Centre in Christchurch I stumbled upon this plaque commemorating Karl Popper's tenure at the University College and the writing of The Open Society and Its Enemies in 1943. 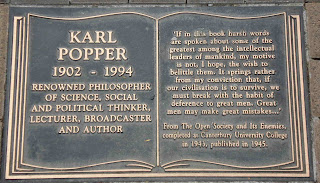 The quote of Popper's on the plaque came to mind when I watched Julian Temple's biopic of Joe Strummer "The Future is Unwritten". Strummer had obvious genius but he also had some crap character traits - dropping people, self obsession to name two.

As someone else said "Don't follow leaders, watch the parking meters".
Posted by Neil at 6:35 pm No comments: