Madeleines. Or how things were when I was a lad. Last night Rullsenberg and I began watching the 1980's drama A Very British Coup with the splendid Ray McAnally. Even better was the screenwriting by the incomparable Alan Plater.

It being a school night we stayed til the Foreign Secretary, played by the always good Jim Carter, came back from the USSR with the money to free the nation from the strictures of the IMF. If only it were that easy. Marital infidelity, and - worse - being discovered by the press, meant he then had to resign. What happened to the dictum that Labour scandals were to do with money and Tory scandals with sex?

Thursday we get to watch it til the end.
Posted by Neil at 10:36 pm No comments:

That would be every one from one hundred to one. I was looking at George Szirte's blog on the brilliant Jan Svankmajer when I found this short film.

But should zero find its way in?
Posted by Neil at 9:36 pm No comments:

Back to My Roots

As an exiled Wolverhampton boy I do miss the old accent. And yes, it is an old accent still using many Anglo Saxon sounds. The Black Country Bloke at Large writes:

Basically the dialect of the Black Country seems to preserve the way people in England spoke before the great vowel shift!

The Great Vowel Shift was a gradual process which began in Chaucer's time (early 15th Century) and was continuing through the time of Shakespeare (early 17th Century). Speakers of English gradually changed the parts of their mouth used to articulate the long vowels. Simply put, the articulation point moved upward in the mouth. The vowels, which began being pronounced at the top, could not be moved farther up (without poking into the nose); they became diphthongs1. The upshot has been that the Anglo-Saxons lived (like the Scottish still do) in a 'hoose', and the English live in a 'house'; the Anglo-Saxons (like the Scottish) milked a 'coo', and the English milk a 'cow'; an Anglo-Saxon had a 'gode' day and the English have a 'good' one; an Anglo-Saxon had 'feef' fingers on each hand and the English have 'five'; they wore 'boats' on their 'fate' while the English wear 'boots' on our 'feet'. The Great Vowel Shift is still continuing today in regional dialects; many speakers are now trying to move the topmost articulation points farther up, producing new diphthongs.

So we do genuinely spake Shakespeares english!

For those of you who have been left wanting more try these Black Country Dialect sayings.
Posted by Neil at 12:14 pm No comments:

Jon Pike made a speech on the 2nd October about the death of the campaign to discriminate against Israeli academics. That's what you'd expect.

In the speech he goes on to make a welcome call for support for "real solidarity" with Israeli and Palestinian students and academics by supporting Gisha, Center for the the Legal Protection of Freedom of Movement, and Hamoked, Center for the Defence of the Inividual, and FQMS, the Foundation for Al Quds University Medical School.

Hamoked described itself as

Hamoked: Center for the Defence of the Individual is an Israeli human rights organization whose main objective is to assist Palestinians of the Occupied Territories whose rights are violated due to Israel's policies.

Both Gisha and Hamoked "oppose the restriction placed on Palestinians form studying at Israeli universities."whilst FQMS

provides teaching, and examiners on the medicine courses at Al Quds University and its Abu Dis campus. The Foundation provides funding for Palestinian students to train over here, and covers travel costs for British medics to go over to Al Quds. In particular, some of the teaching is at a distance, by email and video conferencing, including with students in Gaza.

Pike goes on to say

We publicised and campaigned around the case of Sawsan Salameh, prevented from taking up her PhD place at Hebrew University Jerusalem. There are, right now, restrictions placed on the travel of Palestinian students, and in some cases these are preventing them from taking up places at UK Universities.

We could not do this sort of work, as a union, before. We could not say a simple thing: that it’s wrong to discriminate in access to education merely on the basis of nationality. Now, we can say this, and in due time, we might even get a hearing. The fact that our voice may easily be dismissed in Israel at present is the fault of the boycotters. Right now it is important to raise the issue of the Bradford student from Gaza who is prevented from taking up his place because of the restrictions placed on exit and travel.

It is important to campaign against restrictions of travel rights for peaceful Palestinians. Free movement is a general human right.

Any policy of collective punishment or the assumption that people of a certain ethnicity are all guilty is racist and morally wrong. Guilt is an individual thing and should be punished accordingly.

[FQMS's president was Lord Gilmour who died in September 2007. Their website has not been updated since. Their aims are worthwhile but their website maintenance is sporadic.]

Exploitation That's What It's All About

Going through my photos from this year I found two images of window displays from job agencies.

The first image comes from Hollywood Boulevard in Los Angeles.

The second image comes from Derby in the East Midlands. 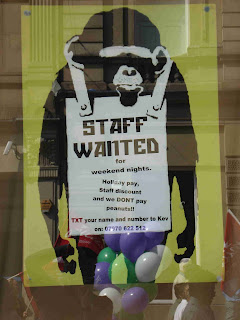 They say they do not pay peanuts but what does a monkey say to you? It says peanuts to me.
Posted by Neil at 8:03 pm No comments:

Doing some reading of other people's blogs I read Reidski's excellent The Big Blowdown and saw this video by Dan Le Sac Vs Scroobius Pip.

Tomorrow I have a dental appointment. Reminds me of this Seinfeld scene:

And here's another one about an answer phone and call screening:

Class (but not the sort that lends itself to a materialist analysis).
Posted by Neil at 10:40 pm No comments: