Deference and the Elder Statesman

There is a tradition in the European Parliament that the eldest member becomes "the father of the chamber" and delivers the keynote opening address after the election. That's a gesture of deference to the wisdom of age. Just because you have lived through a greater number of years than any one else it does not automatically mean you are wiser. It just means you have blown out more candles on your birthday cake. With time some juvenile arseholes mature and become wiser people. Others just become older, wrinklier arseholes.

After the election the oldest member of the chamber could be a fascist, specifically, Jean Marie Le Pen. So the European Parliament, set up in the wake of the horrors of fascism, will give a platform to a fascist. Such is the way of history, and democracy, to repeat, like a bad gherkin, the first time as tragedy ... .

Stop Le Pen getting to the parliament.

In a further warning about the activities of fascists, the MEP for South-West England and Gibraltar warns of a BNP surge in the forhcoming election.
Posted by Neil at 7:30 pm No comments:

On the Sanctity of Contracts

There's a piece in the Guardian about tax fiddling banks.

A comment there points to this Huffington Post piece on how to stop bankers and insurers getting their bonus, contracts be damned.

"Sanctity of contracts" has for some time been TARP's equivalent of Harry Potter's magic wand, the thing you waved to make difficulties disappear (for financiers, of course; if you are an ordinary worker with a pension contract, by contrast, the magic doesn't work for you).

Those who want bonuses can have their jobs transferred to a new unit with all the toxic debt. If they refuse to waive their bonus then that new unit will be made bankrupt and has no money to pay any bonues. Problem solved.
Posted by Neil at 8:38 am No comments:

Reasons to be Impossible discusses the Borgean army.

Though commanded by a real Lieutenant General, headquartered in Padua, Italy's so-called Terzo corpo designato d'Armata was a fiction - a giant cold-war bluff. It was dreamed up in the early 50s to convince Moscow that Nato's frontline was altogether more solid than was the case.

Successive commanders and their minuscule staffs generated mountains of paperwork to show that any commie troops breaching the Yugoslav border would have to reckon with an entire army corps, up to 300,000-strong, on the flat Venetian hinterland. Troops - most of them imaginary - were recruited and promoted, fuel was notionally stored, and ammunition supposedly distributed in perhaps the most elaborate exercise ever in Italian fantasia.

The army was disbanded in 1972 but archives and barracks the length of Italy have remained clogged with what La Stampa said was "tonnes" of paper. And none of it can be destroyed. Under Italian law, officially secret documents can only be pulped once they have been declassified. And they can only be declassified by the office or unit that created them. And, of course, this no longer exists ...

In your dreams you are a four star general. Some dreams.

If all that is solid melts into air what does that stuff that was in the air to begin with melt into?
Posted by Neil at 7:39 pm 1 comment:

Sometimes a cigar is just a cigar, but sometimes it means something else. Sometimes people like a band because they like the music and the lyrics, and it all reminds them of important times. Great. That's part of what music should do.

Sometimes someone writes about their love and affection for a band and it comes across as being all about that person wanting to be associated with the message and the reputation of the band. That can be good as well.

Now in these days of social networking sites and revealing your interests a declaration of love for some bands can be the same as wearing a comedy tie shouting out "what a tosser". To be specific there are some managers, of a certain age, who proclaim themselves fans of Mark E Smith and The Fall. They may well be ardent fans. Too often they appear as too self-consciously giving off a message of "I am a maverick" when everyone else reads it as "tosser".

The Fall are, and were, a good band. But they don't half attract a lot of tossers as fans.
Posted by Neil at 12:55 pm 1 comment:

Motto of the Day

There's a letter in todays' Grauniad by the actor Bill Paterson about Caledonian integrity.

While wee Sir Fred was a Paisley school boy in 1973, we toured the country with John McGrath's great polemic The Cheviot, The Stag and The Black Black Oil. Towards the end of the play, we let rip with the statement: "Nationalism is not enough. The enemy of the Scottish people is Scottish capital as much as the foreign exploiter."

Isn't that true of all nationalisms? They aim to unite a people against "the foreign" while ignoring the class divisions and the power basis of the local society. Nationalism's rallying cry "kick out the foreign exploiters and replace them by a local exploiter" isn't going to get a lot of support when put like that.
Posted by Neil at 9:11 am 2 comments:

Last saturday Rullsenberg and I took the train to Lincoln.

Here's a shot of Lincoln cathedral. 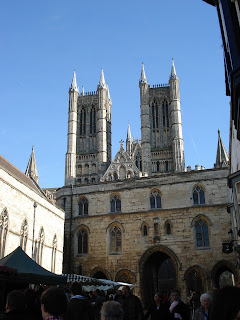